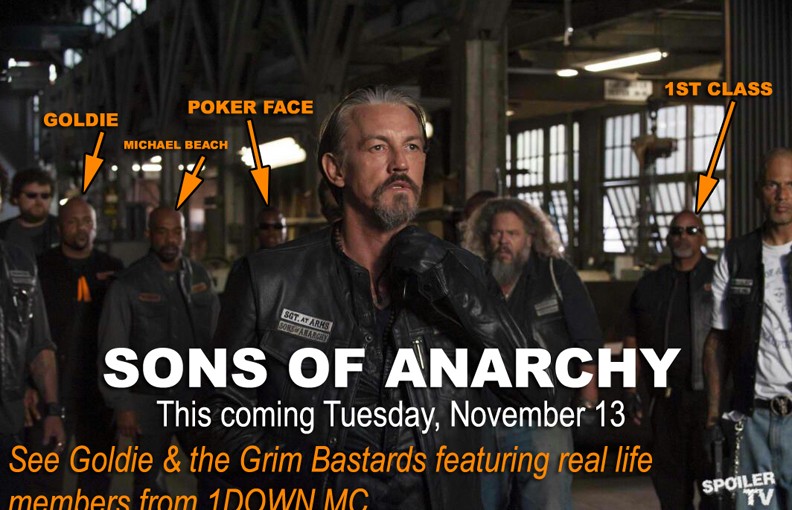 On Tuesday, November 13, 2012 you will see the 1DOWN MC featured on hit television show SONS OF ANARCHY. 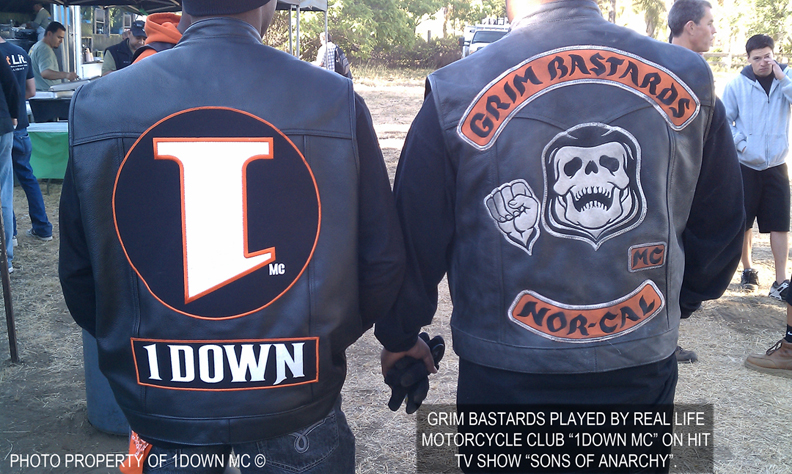 1DOWN MC real life members are also responsible for playing 90% of the Oakland street gang in Sons of Anarchy called the One-Niners.

Being featured on the Sons of Anarchy was “Something like a dream come true says Goldie DeWitt. I was a honor to meet and work with all the guys for 4 seasons in a row and also build a cool personal friendship as well.” 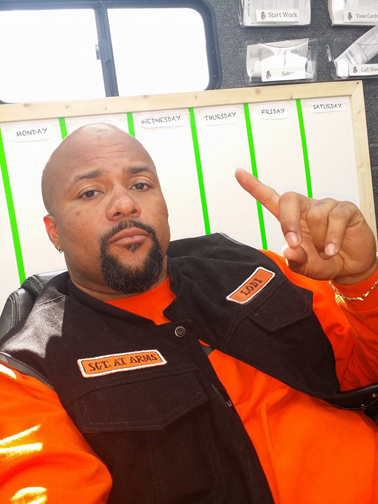 SONS OF ANARCHY filming today right now. Here is a pic I just snapped with Charlie Hunnam aka “Jax”. The other pic is during what they call “Hair & Make-up”. I have no Hair and i wear no make up but I still have to get Touched .  I also got my real life club brothers from 1DOWN MC on the show with me starring as the GRIM BASTARDS. Feels good being able to provide to my loved 1’s.

1DOWN MC bringing THE GRIM BASTARDS to life! 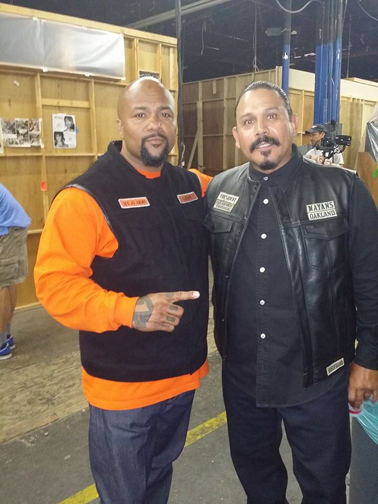 SONS OF ANARCHY filming for Season 7. Goldie DeWitt with my good friendEmilio Rivera. I play the Sgt At Arms for the Grim Bastards and he plays the President for the Mayans. Emilio is really a good dude and I’m honored to have met him and built a friendship and a good working relationship. I congratulate Emilio on being clean and sober for 24 successful years! This is a “TRUE OG” that came from the streets and changed his life for the better and has kept focus on staying positive and being a great husband, and wonderful dad, a hard working man and a provider.

You can also catch Emilio on Thursday nights on the new hit tv show “Gang Related” on channel 11 at 9pm.

SUPPORT YOUR LOCAL BROTHERS FROM THE HOOD & FROM THE STREETS!
We’ve been blessed with the opportunity to do better so please support the movement.

Thank you and much love and respect.

When I’m filming on SONS OF ANARCHY staring as a GRIM BASTARD I am forever and will always be 1DOWN MC under that television made for tv vest. You can see for yourself I wear my real life 1DOWN MC cut(vest) under the GRIM BASTARDS vest. In the other photo you will see I wear my actual real life knife with 1FF1 on it, on the show. 1DOWN FOREVER FOREVER 1DOWN.

I might bring a character to the show, but underneath it all is a real deal real life motorcycle club President from 1DOWN MC.

Don’t get it twisted. The story line of the show is made up, fake and for entertainment purposes, but this dude right here is 111% REAL STEAL.

Today is the last shoot for episode 6. Tomorrow starts the first day of filming for episode 7. Each episode takes about 6-8 days to shoot.

Not sure if I will be in episode 7 yet. Things are running a little behind and in this industry you gotta stay at ready, so you don’t have to get ready!

Much props to Jax, Boon, Tig and the rest of the guys for their dedicated hard work. They get paid the big bucks to do it, but it still takes lots of effort and dedication to do it daily.

It’s that time again…. 1DOWN MC is back on The Set for filming of SONS OF ANARCHY. It’s time to bring the GRIM BASTARDS to life.

After 6 years of being with the show I am happy to say that I got a really fucking great “$$$$$” BUMP today and I just signed new paperwork for residuals!!! Fuck yea!!!!! Some of you might ask “what are residuals?” Well, that’s that good fucking money. That’s the money you get paid for work you’ve already done. That money just comes in the mail periodically.
THANK YOU God for blessing me with great opportunities and most of all, thank you for providing me with the tolls to capitalize on the opportunities you have blessed me with.

To everyone reading this I want you to know the reason I post this is to motivate and show you that life has so much to offer! You just gotta hang in there and keep reaching for the top!

GRIM BASTARDS bringing some color to the Teller Morrow garage.

Lucky me they featuring 5 of my very own personal Harleys on the show.(Sons of Anarchy) I just snapped this pic.

In the 1 pic they are setting up the GO-PRO on my HARLEY ROAD GLIDE.

All stunt riders hired for this scene. I’m the only GRIM BASTARD who wasn’t replaced by a stunt rider for this scene. Feels fucking creepy having these dudes ride my bikes and i don’t know them. Just gotta hope and pray everything works out smooth. Good thing the TV show has the bikes all covered by a fat insurance policy. I’m wearing my white helmet but I snatched it off right away for the shooting scene.

You will see my name in the credits as GRIM BASTARD STUNT RIDER #4 on Episode 6. Fuck yea!!!

I gotta say it’s been a blast working on the show meeting all the guys and being blessed to be part of such a historic tv show. I gotta say it’s kinda sad to see it coming to a end…. but when something ends, something else begins! 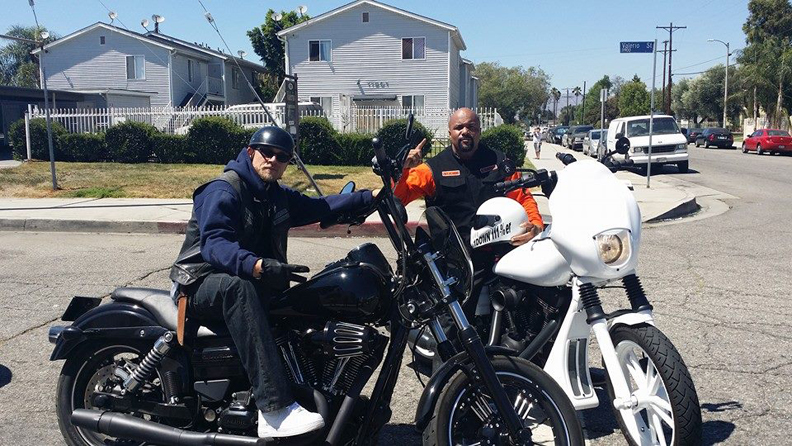 On the set of Sons of Anarchy.