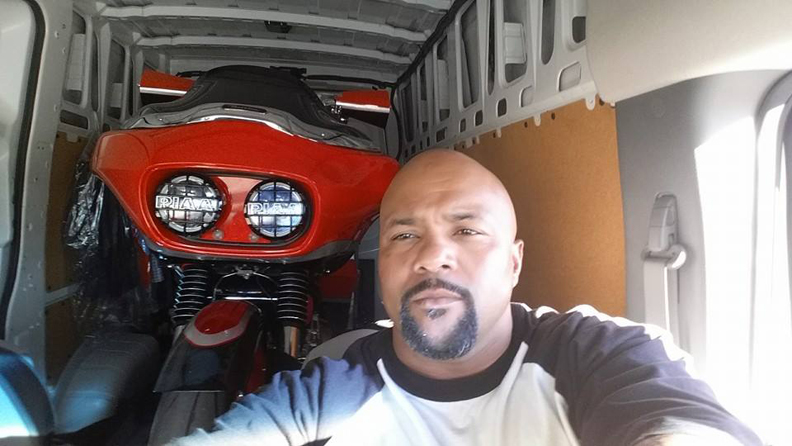 Today I went and picked up my GRIM BASTARD Road Glide from the Sons of Anarchy filming studio lot. Sad sight to see… 7 years of history just wiped away, torn down, and painted over in just a few days…. but hey its the life of TV production. Build it up, tear it down.

Well, the show is over no more Grim Bastards, but my real life club 1DOWN MC will continue to thrive and move mountains and make history!

I’ve met a lot of people and I’ve done projects with many people, but the Staff, Crew, and Actors on SOA were the coolest folks I’ve ever worked with! I’ve seen many people come and go from the show through out the years and some how I managed to stay alive for 6 years on the show, never got killed, and became a very strong “solid” influential character that was heavily tied in with the Sons of Anarchy mc all the way up to the very last season….. and more

You will see me in Episode 10 which is next Tuesday! You will also see my new “Gold” Harley FXR sitting outside The Bar. Wow, what a coincidence… my bar in real life that I owned only had the words “THE BAR” as the lettering on the outside wall of my bar, so does The Bar in this upcoming episode of SOA. This episode is powerful!!

My Road Glide got some fame! and I’m happy to get er’ back home. I got another TV offer for my Road Glide so it looks like I might find myself becoming a Agent for my bikes

The exposure from SOA is WORLD WIDE insane!!!!! Thank you to all the kind Fans the support the show. The show wouldn’t be shit without you.

Much love and respect,

Goldie DeWitt
1DOWN MC
111%ER
Featured on SOA as “Menace” from the Grim Bastards.