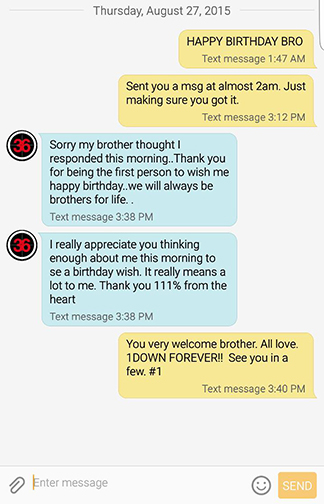 In 1DOWN MC it’s all about RESPECT and LOYALTY to the 1DOWN movement. I teach my guys to pay respect forward and never give a half ass response to someone showing you respect. I’ve learned that it’s always good to do a kind respectful follow up on something before you jump to conclusions. The effort & respect someone puts back into their response says it all.

This was me reaching out to my club brother. I don’t even get that type of love effort and respect from my own blood family. The bond I have with my club brothers is something you just can get from your own family.

Most men in motorcycle clubs need that brotherhood cause some of them don’t have family or something like the Blacksheep to their family. So this is part reason why a woman should never attempt to come between a man and his club.

Photo of 1DOWN Supporter