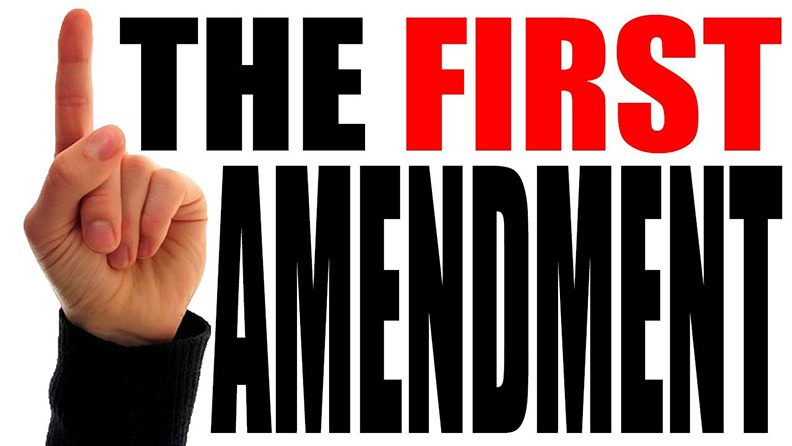 Is what’s going on right now, really going on?  I just hope when this is all said and done, we as Americans will not have a ruling that violated our 1st Amendment.

The 1st Amendment to the U.S. Constitution guarantees the freedoms that many consider to be the essence of America. The five freedoms guaranteed by the 1st Amendment are speech, press, religion, assembly and petition. Collectively, these are sometimes referred to as freedom of expression.

Freedom of speech is the foundation on which all other 1st Amendment freedoms are based; without it the other freedoms could not exist. The purpose of free speech is to protect the minority, often unpopular, viewpoint from being overpowered by the majority, or by the government. The minority viewpoint needs to be heard because, in the long term, it may shape public opinion.

Over the years, the courts have clarified when and how speech can, and cannot, be restricted by the government.

In a ruling in 2009, Judge Florence Marie Cooper wrote that a certain motorcycle club’s insignia is a “collective membership mark.”

“In contrast to commercial trademarks, which are used in commerce and generally not entitled to full First Amendment protections, collective membership marks are used by members of an organization to ‘indicate membership in a union, an association, or other organization.’  The use and display of collective membership marks therefore directly implicate the First Amendment’s right to freedom of association.  The Supreme Court has recognized that ‘implicit in the right to engage in activities protected by the First Amendment’ is ‘a corresponding right to associate with others in pursuit of a wide variety of political, social, economic, educational, religious, and cultural ends.’ This right is crucial in preventing the majority from imposing its views on groups that would rather express other, perhaps unpopular, ideas.’  Furthermore, clothing identifying one’s association with an organization is generally considered expressive conduct entitled to First Amendment protection.”

2 thoughts on “Protected by the Constitution? I Hope So!”