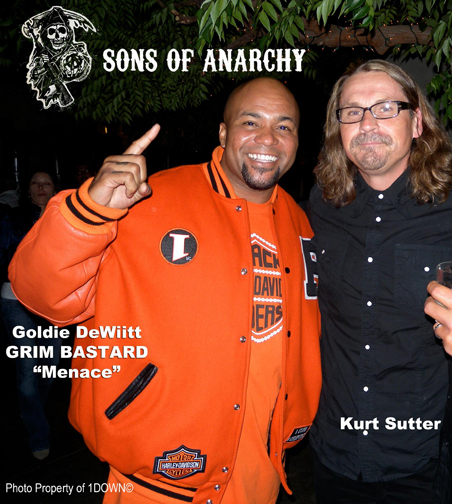 When I post something…. there will always be a educating reason for it. Each 1 Teach 1. Never assume someone knows. If you wanna know for sure that they know, then be sure to tell them. There are so many assumptions in regards to this show. I find myself wanting to educate people on things that are public knowledge but maybe you just didn’t know about it cause it wasn’t put n your lap… well, I’m here to say here ya go!

I commend Kurt for hiring Paris B. It said a lot to so many people. Did you know that prior to season 7 that most all Episodes in all the other seasons were rotated by different Directors each episode. But still again, there was a reason that Kurt did that and it seemed to work. But this final Season was Directed by Paris and to top it off Kurt & Paris allowed another younger Black Director named Charles to fully Direct one of the Episodes in Season 7. Kurt Sutter then came in at the end to Direct Episode 13 of this Season 7. There is so much that goes on behind the scene to bring you such a fucking kick ass bad ass show! So much hard work.

In Episode 10 after we ambush Moses and later that night when Jax is talking to the guy on the porch, Jax originally walks down the drive way comes up to me and shakes my hand and tells me “Thank you” and then he continues to walk down the hill to greet Rat boy, T.O., and the guys. We shot this scene about 10 times, and unfortunately they cut it out. You best believe I was sad cause that was to be my last scene on SOA, but I knew and respected that it was cut for a reason and I respect that. They know whats best, not me.

Don’t HATE on these actors for doing their job. Let it be a gay scene, a murder scene, a snitch scene, a fight scene, a racist scene, or anything they are paid to do on this show, it’s just acting. ALL the racist acting characters in this last episode were cool as fuck in real life. Matter of fact, to be honest with you, I was surprised that a couple of them talked with a “black swag” in their lingo, but when they were acting for the show, they switched it up to sound like a hillbilly of some sort. Funny thing, when on the set, the guys with the Swastika tattoos would make it a point to say “hey Goldie whats up bro, good to see you and good to meet you! This tattoo makes me feel fucking weird, it dosent look good on me right!” we would laugh

My name is Goldie DeWitt and I was lucky and blessed to be part of this historic show that will go down in history as the greatest motorcycle show ever! I wish each and every one of you Male or Female is blessed with the opportunity to take part in something special like this. If the opportunity comes your way, you better not fuck it up, cause it’s a 1 time shot. I always dreamed of being on TV, but I knew I wasn’t a actor, but God threw it in my lap and it was my opportunity to make a dream come true! After this show is over I will continue on with my life in the Adult Entertainment field and my Motorcycle Club lifestyle. The memories of working with SOA will last forever!

This was the first time in my life that I worked with a group of people over a span of 6 years that NO one has ever “Turned on me, Back stabbed me, Gotten Jealous of me, or showed signs of turning into a Hater.” Each time I saw the Cast, & Crew it was fun and welcoming. This show could have went on for another 10 years just on the strength of how well everyone worked together! The chemistry we all shared was something spectacular! As each main character of SOA was killed, it wasn’t only the money from the show they knew they were gonna miss, but the friendships that came from it was something they really grew attached to, and I would say that was the most sad part. Most of the guys cry on their last day of filming their last scene and the entire Cast & Crew gets a bit teary eyed as well.

Well, I hope this opened you up a little bit more on me & the show. The best part about any show or actor is what they give off camera on their personal time and this is something I wanted to share with you cause this is that stuff you won’t see or hear on the show. THAT STUFF THAT REALLY MATTERS! Raw & uncut. Take care and thank you all again for the love, support, and FANS that out do the Oakland Raiders!!