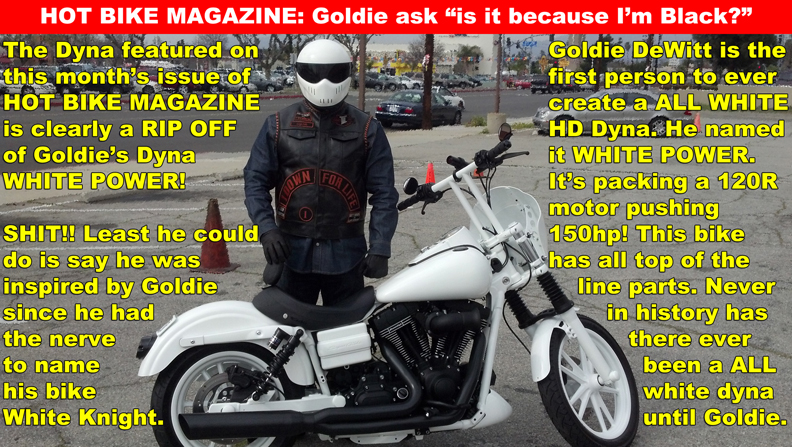 Hot Bike magazine you know you should be ashamed of yourself!! My 2012 Dyna was purchased in Sept 2011 and broke down to the frame and put all the way back together as the 1 & only ALL white club style Dyna, named WHITE POWER and on the road in just a couple months! You folks knew the bike was being built and you knew who the owner of the bike was. The same owner of the Neon Orange Dyna, you snaked pictures of, and ran a short story on my 120R motor but made it a point NOT to mention who’s bike it was. THAT’S FUCKED UP!! So, once again you pull some shit that makes it look like you just CAN’T feature or give props to a BLACK MAN with a BAD ASS FUCKING DYNA!!! My Neon Orange Dyna was even Featured on Season 5 of Sons Of Anarchy! THE ONLY DYNA IN HISTORY TO EVER BE FEATURED ON THAT SHOW THAT DIDN’T BELONG TO ACTUAL CAST OF SOA. Have you contacted me for a story on that? FUCK NO! Will you, fuck no, but hell yea if I was White. Is this a race thing? You sure make it look like one! I live a NO-COLOR line lifestyle, but you seem to DRAW THE LINE when it comes to featuring BLACK PEOPLE in your magazine. I am a real life motorcycle rider in a motorcycle club that owns a motorcycle shop that knows his shit. I ride a Dyna Club style bike cause I live this shit, eat this shit, love this shit. It sucks that you featured on your cover, someone who is a Skate Board champ that obviously used the creative concept of designing a all white dyna from my bike and named it White Knight, with no mention of the original all white Dyna by Goldie DeWitt of 1DOWN. Don’t know if anyone has told you, but thats straight up BULLSHIT and I will call it like I see it!! I got something for you and I’m sure you already know that I’m in the process of building the BADDEST FUCKING Harley Davidson FXR ever!!! Let’s see how you poke your head around the bushes looking at it but acting like you don’t see it, but the moment some cool white guy comes with “something like” Goldie’s bad ass untouchable FXR, you gonna slap that shit in your magazine! Maybe I will use a stunt double white guy as the owner!

HOT BIKE MAGAZINE NEEDS TO GET OFF THAT RACIST SHIT AND GIVE PROPS WHERE PROPS ARE DO!!!!

I posted my response to how I felt about this months Hot Bike Magazine 11 hours ago. I know I have a voice, and I know my words are strong and they have a way of making people understand and see something they may have over looked.

The Editor of Hot Bike Magazine has already contacted me via Facebook inbox and sent me a Friend request. We only had 3 friends in common, and I have close to 5,000 people on my friends list.

Jeff Holt is the current Editor of HOT BIKE Magazine, the guy caught in the middle of this, the guy who has to step up and deal with this. Goldie Fact: yes I know the magazine publication business is time sensitive, and everything is always running late, and under the gun, but THE PEOPLE will still hold you accountable for your mistakes. Trust me, I know this because I created, edited, published, & distributed my very own full color high gloss printed magazine for 5 years called 1DOWN Magazine.

I’m not crying or begging for attention in no way at all. For me it’s all about being treated fare, and in this motorcycle lifestyle I live, being treated fare is something very important to me. Respect is #1. This motorcycle community is small when you know a lot of people and my objective was simply to let Hot Bike Magazine know how I felt, NOT TO START A RACE WAR! I LOVE WHITE PEOPLE, MEXICAN PEOPLE, BLACK PEOPLE, ALL PEOPLE. Will this situation be of help in their future articles? I would hope so.

I will now accept his friend request and give him full privilege to respond right here if he needs to, but if not, I am all good, and I appreciate him contacting me right away, as he did.

With me paying full respect to what the Editor of Hot Bike magazine had to say to me in response to my write up, here is his uncut msg to me.

Jeff Holt wrote:
Hey. I am the Editor of Hot Bike and just wanted to say we in no way are racist or give a shit what color anybody is. it’s all about the bikes. I know who you are, and that you are one hell of a builder and rider.

When your bike was built and debuted we weren’t running Dynas and that was the former editor’s fault not mine. I’m just the guy in charge now who got some good photos from a friend of mine of three dudes riding and figured that the bike would look good on the cover and knowing that Corey has a million fans from skateboarding that it could get some more people to read the magazine who may not normally.

We never said anywhere that Corey’s was the first all white Dyna. I had seen all-white FXR’s up in the bay for years. to tell you the honest truth being first had nothing to do with having a set of photos ready at my disposal to run in the magazine and a good enough photo to run on the cover. that is what my job is all about.

if Corey didn’t want to give you a shout out in the article , that’s on him. I don’t edit our interviews and if you got a beef with him take it up with him not us.

I can understand how you may be pissed off, but you have to understand the complete set of circumstances of how we decide what goes in the magazine and to tell you the truth we are always under the gun to get the next issue out, so when riders, owners, and photographers make it easy, then it easy for us to get them in the magazine.

I would love to squash this and have you take that photo and comment off Facebook, but that’s your call. Nonetheless, I would love to something on you and 1Down for Hot Bike anytime you’d like.

Well. I have said enough. Get with me if you want and we can go from there.

SO…. HE BLOCKS ME

Funny folks out there now a days. After the Editor of Hot Bike magazine sends me a inbox with his so called legit excuse, and also asking me to delete my pos, and sending me a friend request, he has now Blocked me. I guess he wanted to just keep it all a big secret and say what he had to say and have me delete my post without anybody knowing he reached out to me.

What a coward chicken shit move if you ask me. So, you can believe his story if you want to, but i choose not to believe him at all now.  IM GLAD I SPOKE UP. It helps the truth come out sometimes.

Below is my Facebook inbox response I sent to him in response to his original reply. And as you can see, I was nothing but cool.

HERE’S WHAT I SAID TO HIM:

Thank you for your reply. Jeff I keep it 111% straight up on everything I do. I don’t chump people off and I am responsible and accountable for everything I do and say. People don’t give me room for mistakes at all. So, I find myself making people accountable for the same, or at least facing what they created.

This was not a direct attack at you, it was me just feeling really chumped off and being clowned in a main stream biker magazine. Do I accept your response, yes. Do I look at this as a way for me to now get a write up in your magazine? No. I feel we all learn something from someone new at some point in our lives, and I feel this is something you, me, the people can all learn from. ACCOUNTABILITY.

I’m a good dude Jeff, a fun dude, positive, sharp, and smart. Sure there are people who might not dig me, but if you ask them have I ever done anything to them, I guarantee you they say No. Haters come with popularity, but I gotta keep pushing forward, and keep giving back with a smile on my face.

I respect your position as Editor of Hot Bike magazine and I know it’s a hard gig, but just know at the end of the day, people don’t care about how hard it is, they just want to see a fair finished product.

I stand behind everything I say and even though we have not spoken via phone or face to face, I hold no ill feelings against you. I welcome you to run this response anywhere you want to because I feel it’s fair.

You take care and I wish you success as Editor of Hot Bike.