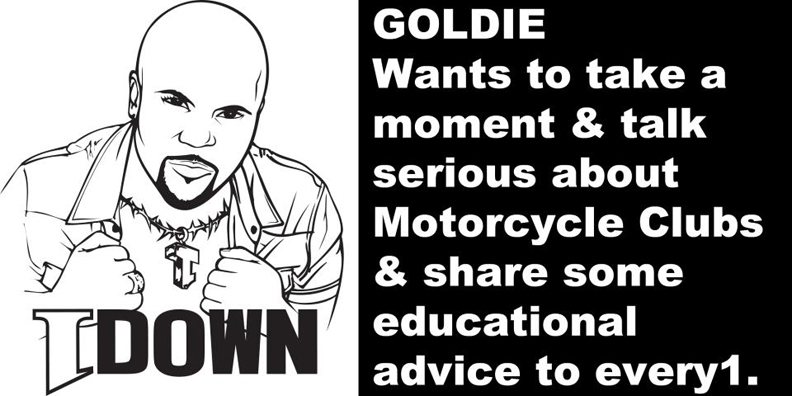 MEN NEED TO STAND FIRM & RESPECT WHAT IS BEING ASKED OF THEM BECAUSE THERE IS A REASON FOR IT.

REGRADING FEMALES
**DO NOT fuck your brothers ol’ lady.
**DO NOT date or fuck your brothers ol’ lady after they break up.
**DO NOT invite your brothers ex ol’ lady to a club event.
**IF A CHICK is passing herself around the club, don’t let her land on you.  Keep it pushing.  You can’t turn a hoe into a house wife.  Don’t be that brother who fell for the community entertainment.
**IF YOU met a chick at a MC event & she has history with clubs, she could be a problem.  Keep it pushing.
**NO FEMALE should ever come between you and your club brother.  Bros before hoes!
**DON’T FORCE your ol’ lady to be around the club if she doesn’t want to.  If you can keep her away from the the club and she is okay with it, then trust me, that’s the best recipe.
**YOUR OL’ LADY needs to love the love you have for your club.  If not, she’s a slow cancer for you & your relationship with your club if you allow her to be.  If you have to make a choice, choose your club.  You can replace her, but you can’t replace your club.

REGARDING THE CLUB
**Always pay your dues on time.
**Never talk club business with anyone!
**When it comes down to it, yes it’s true, the club comes first.  Believe it.  Save your feelings at getting mad at the club.  This has been the foundation of how it has been way before you ever came around.  It was created by men who had nothing but their club to depend on.  So if you can’t allow the club to be first at times, or all the time, then being in a real motorcycle club is not for you.

FEMALES DON’T RUN SHIT ON THE MOTORCYCLE SET. Men run this shit 111%.  Men decide what will happen, why it will happen, when it will happen, and if it’s gonna happen.  If a female claims to run shit, she’s saying it to a bitch ass dude who don’t matter & is not in a recognized motorcycle club.  No female in her right mind would ever dare speak that ignorant shit to a real deal MC member!

IN THE REAL LIFE MOTORCYCLE CLUB WORLD, females are only recognized to be 1 or 2:
1. PROPERTY OF – You are spoken for. You are someone’s Ol’ Lady. You are off limits.
2. ENTERTAINMENT – You attend MC events to party & socialize.

NOTE: If a Woman is in a coed Motorcycle Club or all Female Motorcycle Club, then she is represented by her patch. It means that she is a member in a motorcycle club. It means she is NOT Entertainment, and she it not being represented as a Property Of. If a woman ranks over a MAN in their own club, that’s simply and only respected within their club. Many all Male motorcycle clubs do not recognize females in a MC. It is what it is.

A female Social club has absolutely NO ranking and don’t exist in the real motorcycle club lifestyle.  A female Social club is a group of females that wear vest, and operate with a chain of command such as President, VP, Srgt @ Arms, etc, but they do not ride motorcycles. For what? Who fucking knows! Money & Attention I guess and also a backdoor to be around bikers without looking like groupies.  “It ain’t working, you still Entertainment.” They attend functions & throw functions in conjunction with the motorcycle community. This is ONLY seen and allowed on the Black Motorcycle Set. This is not seen, recognized, or accepted on any other motorcycle club community.

Goldie DeWitt has nothing against a female MC member, or a Social Club female. I just want everyone to know “their lane”. You need to really know what you are getting yourself involved with. Who you are and how people view you that really matter.

My views, my club by-laws, and how I operate were grounded & founded by the true root of the BIG motorcycle clubs that have been around for many many years that have stayed loyal to how things really should be & stay! You know, that % of motorcycle clubs that take this lifestyle real real serious. You better know, or you better find a new hobby, cause this is a lifestyle that 1DOWN MC takes 111% serious.

If you agree with me, I would assume you to be someone educated in the real MC lifestyle. If you disagree with me, then unfortunately you need to be educated and you have been misguided by the wrong teachings and you should not take another step towards this lifestyle until you learn the history of THE REAL MOTORCYCLE CLUB LIFESTYLE.