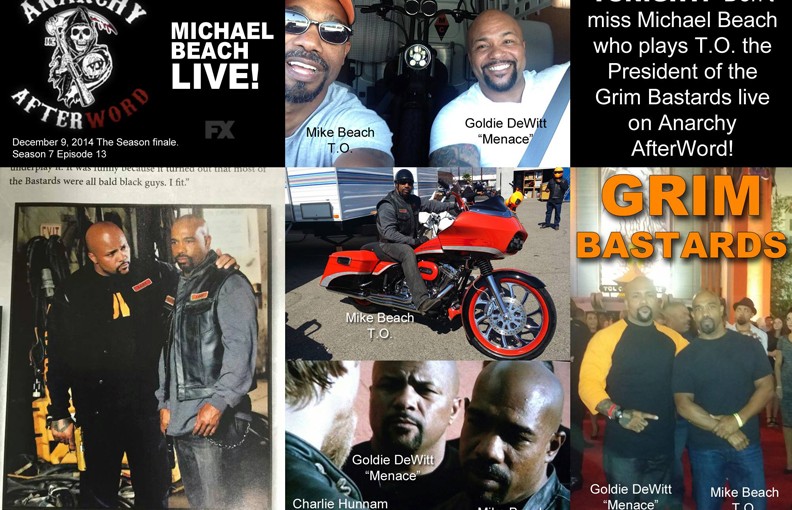 I bring the HOOD to Hollywood.  They know my get DOWN, if you want me involved you gotta let me be me from the root. I’m no actor by no means, I’m just a lucky guy who got the opportunity to be involved in a historic tv show by just being me and loving what i represent and what i do. 1DOWN is what I am and I live it everyday 111% to the fullest. So best believe when you see me, you will see 1DOWN.

Something people need to remember, this is just a tv show. Don’t get it twisted thinking this show is a template to what the real MC life is about, it’s NOT.

This show is for entertainment purposes only. JAX does not walk around holding himself as a biker when he’s not filming. He’s just a normal dude from the United Kingdom looking for acting jobs trying to make a living. I can honestly say none of the characters on Sons of Anarchy has let the show go to their heads. None of them have joined a motorcycle club, none of them act cocky, none of them have changed their lives making it a point to hang with bikers, none of them dress different then how they did before they started the show. If you see them at a biker event it’s for a signing and after they sign, they ready to bounce. They don’t wear SOA stuff every day trying to look like a bad ass. I’m not defending these guys, I’m just sharing something with you that you don’t know or never heard directly from someone who works with them.

FACT: The longest running characters on Sons of Anarchy that are in actual real life motorcycle clubs are SOA Character “HAPPY” and myself “Goldie” who plays a GRIM BASTARD character. I’m just the man next to the man, who’s never had a speaking roll but you best believe when ever the camera catches a glimpse of me, I’m soaking up every muthafuckin second I can get!! I’m no greedy mutherfucker but I do know how to turn a lemon into lemonade!!

This show has created so many jobs for the greater Los Angeles community and i can’t bite the hand that feeds me. So you will never hear me talk dirty on the show. Everything the show has asked from me has been everything within the bounds of what I respect within the Motorcycle Club culture. If something on the show is done outside the limits of what is seen as foul by the real MC community then you best believe it came straight from the show creator and he didn’t give a fuck what anybody thought cause its his show. It is what it is. It’s entertainment and he has to do what he feel he needs to do to continue to keep his show at #1 on channel FX.

So who am I on the show? I play a GRIM BASTARD and I am the Sgt At Arms. For those of you who don’t know what that is I am the bodyguard to the President of the Grim Bastards. I’m just in the background always keeping a eye on him watching his back. The President is T.O. played by Michael Beach. The Vice President STICKY played by Malcolm Jamal Warner just came in this season. He’s “Theo” from the Cosby show.

The show has been so much fun. The cast and crew have always been so nice to me and all my guys. 1DOWN MC has the longest run in the show with the most real life motorcycle club members. And I have the dopest and most motorcycles featured on the show owned by 1 person.

When you see that ORANGE & BLACK on Sons of Anarchy you not only seeing the GRIM BASTARDS you seeing a real life club known and respected world wide out of Southern California called 1DOWN MC.